This page is constantly under construction 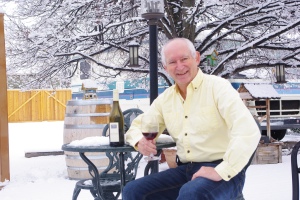 This is a page that is sure to offend everyone. Wine is a lot like art everyone has their own preferences. Since this is my life and my blog I get to write about the wines that I like, that doesn’t mean anyone else has to like them, but you are probably missing something if you don’t.

Most of the wines that I am going to list and comment about are from the South Okanagan and more specifically made or grown in Oliver. These are not listed in order of preference just in the order that they come to mind or the order they have come to my wine celler.

I have a preference to red wine and to heavier (darker red colour) ones as well, however I seem to have a collection of whites as well. I am not entirely sure how I got all this white wine perhaps it is just that when we go out wine tasting we usually get talked into taking a bottle of white wine along with the reds. I don’t drink white wine very often so it stayes around a little longer.

I found an interesting website called the century club. They have a list you can fill out with all the different varities you have tasted. Right now I am up to 32 different varieties so I am going to have to seek out some new varieties to try. Apparently there are over 400 different grape varieties that are made into wine.

These are some of the wines that I currently have in my cellar. These are wines that I would like to keep on hand unfortunatly some are no longer available. Most of the wines I have listed are ones I have more than one bottle of. What you are suposed to do is to replace each bottle you take out with 2. This way you are constantly increasing the size of your cellar. unfortunatly I don’t do that (I can’t afford to). What I do (right or wrong) is from spring to fall I buy wines and then through the rest of the year I drink them. I put down dates for some of these the problem is I drink them and then that date is gone and even though I replace the wine the year is different  It was a good idea that needed some more work. I have quite a few other wines that I haven’t listed some are blends and some are just single bottles that made their way into the cellar.

there are some special wines that are only available to very select people .I am going to include my brother’s wine here it is the “lone dog ranch ” label and depending on which kit he is using will determine the variety of the month, I have included it so he won’t feel left out. There are two other friends who make wine that is absolutely fantastic. They both manage vineyards here in Oliver and make wine for their own use and for friends I absolutely love all the wine they make and have tried several from each of them Thanks Erin and Sam. 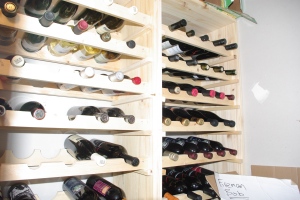 some of these are gone ;(

some of these are gone too ;( 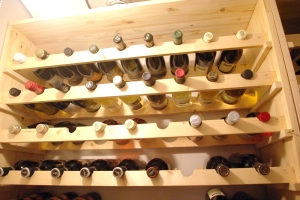